The Tranquillity of New Ireland

In April 1990, several months after I was crowned Miss PNG (1989), the PNG Red Cross sent me on a national tour across Papua New Guinea. The tour was to promote the work of Red Cross in charity, disaster relief, blood transfusion services and youth growth and development programmes. This trip enabled me to learn new things, see new places and make many friends. It was a discovery of the magnitude of the work of Red Cross had done in the country and how many people dependent on these services. I was happy to be part of it all and be an ambassador for Red Cross. Unfortunately this privilege no longer exists in the quest due to lack of funding and the changes to the beauty pageant.

During my Red Cross travels, I also saw some of the most beautiful parts of PNG. Pictured is a small coastal village we passed during my tour of Kavieng, New Ireland Province. I took this picture of the house on the waterfront. A few days ago, I was delightfully surprised to find the picture (above) while going through some photos from 27 and 28 years ago. It brought back many memories of the wonderful time I had experienced. 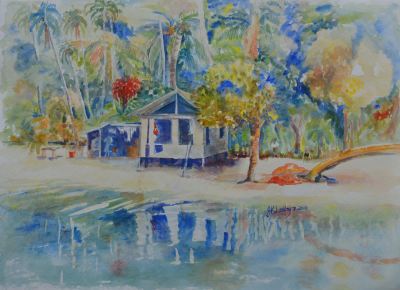 Immediately, I had to paint this little house. The colours I chose reflect the glorious feeling I had during that time, while experiencing love and friendships; the tranquillity and wonders of my beloved PNG. I was very lucky to see a lot of the country during my reign. 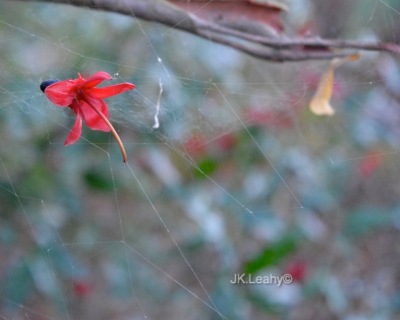 Sometimes, you don’t need words to tell a story. Every day, nature tells us colourful and interesting stories that if you look closely – these stories reflect us (humans), and the way we are. 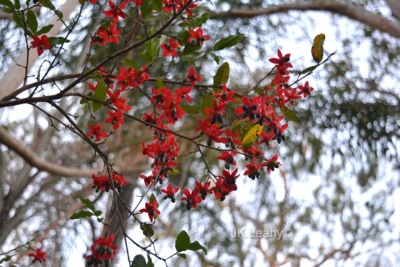 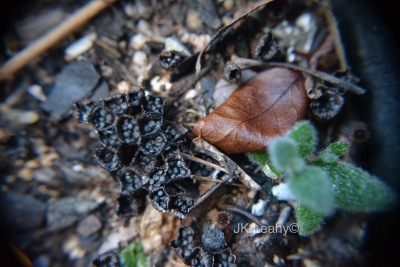 A cluster of dark brown to black pelleted fungi invaded one of my plant pots. I had never seen anything like it. They were tiny, but the use of micro lens helped produce these pictures. When each ‘lid’ – size of a tack pin head came off, the mushroom’s inside was full of black pellets.

A lampshade made from spliced white wire fades. After months of open weather, sun and rain the lampshade now reveals its true colour of indigo before rust moves to invade its crispy white lines. 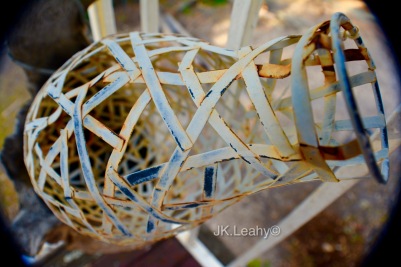 My sister-in-law asked me once if I wanted to see ice cream cones.

I thought that was a rather weird thing to suggest, until I actually saw what she meant. 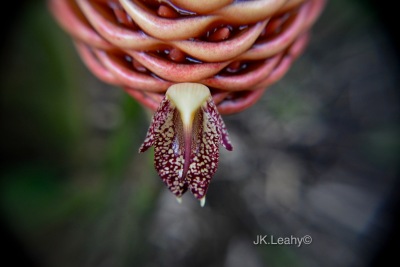 Shampoo Ginger Cones are referred to as ice cream cones in Lae, Papua New Guinea where many other beautiful ginger plants are found. This plant species originated from Hawaii.

When it flowers, these tiny orchid-like bloom protrudes from the cones. It is hard to imagine that a tough, robust and rubbery bulb could produce such a delicate flower.

The featured collection (here) came from photos I took of my sister-in-law Esther Kauc’s garden. Both Esther and my mother have cultivated a wide range of ginger plants for the unique flowers and dense leafy coverage which provides shade and boundary for their homes.

Upon seeing the plants, I realised what Esther had meant. I didn’t have any urge to bite into them – but I was captivated by the ginger’s beauty so much so, I could not stop looking at them. 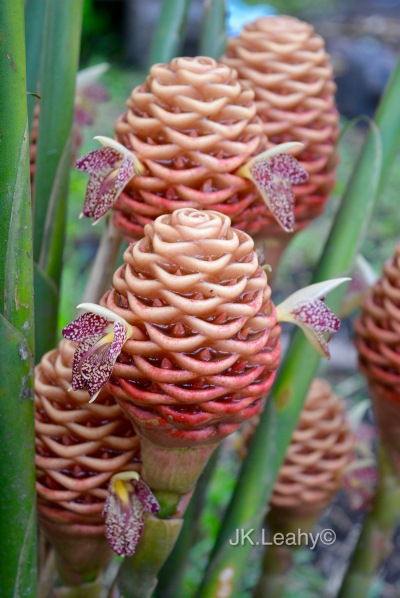 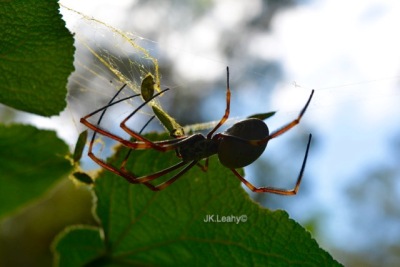 I like spiders and I have posted images of Queensland’s tent spiders here before in Gangster in the Garden and Weaving Art into Web.

The Dome Tent spider, (Cyrtophora moluccensis) is the largest spanning the width of a man’s hand. The long body is strongly variable in colour with a broad black to rusty-red stripe for most of the back and bright yellow and white spots along the edges.

Tent spiders have modified the circular web into a dome, spiked tent or broad scoop.The Dome Tent spider builds a large dome-shaped web from 30-60cm across with a long tangle of web above the dome and a small tangle below. Funny enough this insect’s ‘home design’ or feature has been copied and commercialised by adventure companies. They build and sell various camping tents that are structured the way the spider builds its web. 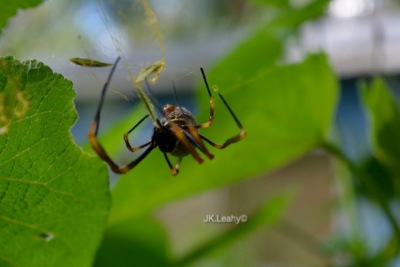 The female hunts from the top of the dome where she lays her eggs in a long bean-like and attempts to fend off the large flesh flies (Sarcophagidae) that parasitise them. From about Rockhampton northward, these spiders form massive colonies as big as houses. See more at Queensland Museum. I saw one colony yesterday where I counted seven spiders all combined their architecture to form a web structure approximately two metres wide by three meters tall. I did not have my phone nor my camera with me to capture the image, unfortunately. 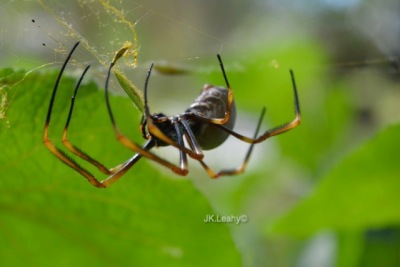 Here is another kind that was weaving its ‘tent’ across my front door.

A reflection mirrors the day

Finding its way as water may

A rainbow lurks as if to say 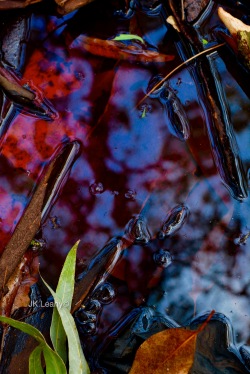 This grasshopper made a perfect landing on our red bar chair when I was up-close and photographing a Kookaburra outside yesterday. Sounds like a David Attenborough moment, but only because, the grasshopper injured its second left joint. There is an ant on it if you check the third picture down.

I shall post the Kookaburra pictures tomorrow. I was pleased the red bar chair provided more than what I could hope for in a backdrop, especially providing a good contrast to the insect’s beautiful green colour. The grasshopper did take off as soon as the hungry bird made a move towards it. 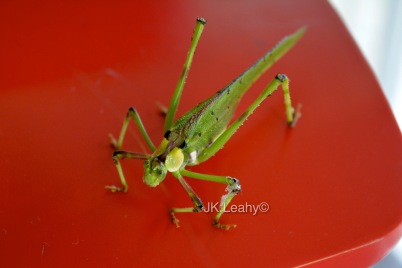 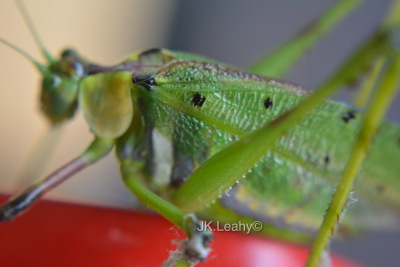 Penelope got married.  This was a news that is no longer news because I was reluctant to share it. Penelope the goddess (see other duck stories) married her stalker. The male duck (pictured with her) lurked around our backyard for weeks as she was growing up last year. He has a tall slim body and deep grey feathers. His head was the darkest amongst all the other ducks. I had not seen him before Penelope was born.

I think I kept chasing this male duck away because subconsciously, I believed he would take her away. None of my threatening moves scared the duck and I was surprised by its persistence to stick around.

Each time I yelled at it, I was scolded by my sons. They argued that the male duck could be Penelope’s father.

“Oh really, you’re serious?” I would say, knowing the duck wasn’t her father.

The dark headed stranger would wait in our yard, in nearby trees and bushes and watch her. I had a name for it, but this blog is G rated so I won’t say it. As she got older, Penelope became silly and stubborn. Her behaviour changed in the evenings, she wanted to stay up and outside the coop. This is the story of Penelope, the baby duckling we raised. I guess I could not say Penelope grew up, got married and lived happily ever after. Not yet, as her story has not ended. Pictured here the feathered couple sat away from the pack and watched the new ducklings swim.

“I am afraid they are getting new ideas”, I said to my own children.

Standing under the hot Brisbane sun, I watched Penelope and thought of her when she was tiny and had a broken foot. She grew up too quickly and being able to fly in November last year, she left home and disappeared for a few days. Then she returned home with ‘him’.  I was not impressed at first, but after a while, I watched the way they spent the day and it melted away  my anger.

The male duck serves the goddess with his love and patience. Penelope is very demanding and seems to bark orders at him. He obliges and keeps calm. Most times, he just follows her. Yesterday, she took him to my second garden near the neighbour’s yard. None of the other ducks go there and I was surprised to see the pair. But, that was where she and I used to spent most times; me pulling out weeds and she eating them.

I am okay with them spending time in my garden. She is happy and she is still here in Bellbowrie and that makes me happy.

I was laughing as I wrote this story, but I did get really annoyed in the beginning with Penelope and this male duck. If you think this post is ridiculous, say so, but I needed to get it off my chest.

These tiny mysterious bugs were all over the hibiscus bush a few weeks ago. They are round and flat roughly the size of a pencil top. Interestingly, they lay white bobby pin-head size eggs, soft and translucent like the turtle eggs. They visit the eggs in pairs and leave in pairs which I thought was strange. I have not been able to find more information, but I hope to soon. By all means, if you do know these bugs, tell us.