Death toll reaches 75 and still counting. Major earthquake in Papua New Guinea (measuring 7.5) over a week ago with two major aftershocks leaves devastation throughout remote parts of Hela and Southern Highlands Province. There is uncertainty on the amount of damage and casualties without access, however, large areas of food gardens have been destroyed and this will cause food shortage in the coming weeks. PNG journalist Scott Waide has this update.

“Liklik rokrok” means little frog in Papua New Guinea pidgin. I once designed and will be bringing back a collection of children’s T-shirts called “Liklik Rokrok”.  Watch this blog for the re-launch later this year.

Frogs play a huge role in our environment and especially the condition of our environment. I have a special affection for this little frog. It was wonderful to find a short YouTube video posted by “Love Nature” about their life and how they have changed over time. I hope you enjoy this video as much as I did. It is amazing to learn about how a tiny creature could evolve throughout revolution and protect itself from predators to this day.

I heard this interesting news yesterday that West Papua is declared as the first province anywhere in the world; and the entire province is now a world conservation site. West Papua remains part of Indonesia. One is hopeful that the political status and the livelihood of West Papua people will be recognised as well.

If coral reefs are the rainforests of the seas, then the Coral Triangle is the underwater equivalent of the Amazon. This is a bioregion that’s half the size of the United States, passes through six countries (the Philippines, Indonesia, Malaysia, Papua New Guinea Solomon Islands and East Timor), and harbours more marine species than anywhere else on the planet. There are single reefs in the Coral Triangle that contain more species than the entire Caribbean. When it comes to abundance and sheer scale, nowhere else comes close to the Coral Triangle.

The Indonesian province of West Papua has just been declared a Conservation Province, a first for both Indonesia and the rest of the world. The new designation is important both symbolically and in ensuring the future health of the province’s astonishing ecosystems. Besides its rainforests, West Papua is the world’s epicentre of marine biodiversity, boasting more species than anywhere else on the planet.

As forest fires rage in Sumatra in the midst of the worst El Nino weather event on record, this example of local government taking action in partnership with local communities and international NGOs shows that real, inclusive action is possible and that it can reach the legislative level.
The declaration was signed on Monday by West Papua governor Abraham Ataruri in Manokwari, the provincial capital, with Indonesia’s minister for Home Affairs, Tjahjo Kumolo in attendance. “This declaration will help us maintain and manage our natural resources wisely and continuously so that future generations can enjoy them,” said Ataruro. The new bylaw designating West Papua a Conservation Province falls under the jurisdiction of Indonesia’s Ministry for Forestry & the Environment.
Supported by Conservation International (CI), Worldwide Fund for Nature (WWF) and The Nature Conservancy (TNC), the local government in West Papua has set up a working group representing a range of civil and political bodies to ensure that the new legislation translates into meaningful action on the ground. They are now drawing up regional bills known as Ranperdasus.

Papua (both Papua and West Papua provinces) is a complex piece of the planet, partly because of its convoluted tectonic history that forms mountainous areas, prominent lakes, swamps and mangroves where Indonesia’s largest mangrove ecosystem is nestled at the head of Bintuni Bay.

The north-western part of Papua is also part of the Coral Triangle Marine Protected Area, containing the world’s greatest diversity of coral-reef fish, with more than 1,650 species in eastern Indonesia alone. Papua’s abundant coastline is magnificent, placed together with more than 1,000 fringing islands like Raja Ampat, Biak, Supiori, Yapen and the satellite islands of Cenderawasih Bay, which also contribute significantly to Papua’s astonishing features.

It is currently considered an area of global priority for biodiversity conservation because, in part, of the species-rich forest environment of Australopapuan fauna, as well as of many uniquely New Guinean species.

Papua has huge reserves of natural resources in the mining and oil and gas sectors and continues to retain some 80 percent forest cover, including large reserves of commercially valuable lowland rainforest.

These all significantly contributed to the gross domestic product (GDP) of the provinces.

A note from the author of this blog – so finally the world is going to conserve the land, place and environment of the West Papua people is this the sign that times are changing for West Papua people?  Could we apply the same kind of protection for the Melanesian PEOPLE in West Papua too?

My entry into the The Crocodile Prize, Papua New Guinea’s National Literature Awards,  won the children’s category. “The Song of the Turtle” is a fiction based on events that happened when I was growing up in Wagang Village, Lae, Papua New Guinea. I will post the story here, tomorrow.

Across the Huon Gulf on coastline Labu, turtles are being protected and a certain coastline has been declared as a protected habitat. The locals are part of the turtle protection programme. I am glad this has happened. Read More on the Labu Turtle project here.

I hoped that “The Song of the Turtle” will teach Papua New Guinea children about how important it is to care for wild-life and wild-life habitat in our country. PNG is lucky to have so many beautiful species and with effects of climate change and human development, numbers of species and wildlife habitat is becoming fewer and soon, some will disappear forever.

Writers from across PNG are 2015 Prize winners

And one of the winners, 20-year old medical student Hazel Kutkue, not only won the Martens’ Award for Young Writers but the national short story prize – a prodigious achievement at such an early age and against some very stiff competition.

Other provinces represented in the prize winners are Enga, Simbu, Milne Bay, Morobe, Madang and the National Capital District.

The writers’ ages range from 20 to 56, averaging 36, and their professions include economist, teacher, court officer, journalist, artist and student.

In the following section we present the names and profiles of the winners and links to their winning entries together with the judges’ comments.

A study by Dr. Peter Reich is looking at the different responses of tortoise-like leaves versus hare-like leaves to changing environments, such as higher levels of carbon dioxide in the air caused by climate change. As each generation of leaves reproduces, new genetic combinations are created.

Dr Reich studies leaves.  Basically a study of leaf takes into account the longevity, productivity and nitrogen content. The University of Minnesota Professor compares the life-patterns of leaves to the fable of the Hare and the Turtle. In the race, the hare is winning the race, but he gets too confident and takes a nap. The turtle passes the hare while the hare is asleep and wins the race. In the case of the leaves, Dr Reich compares the tortoise-like leaves to be slow and steady growers that live longer. The leaves that are hare-like are speedy growers and do not last long.

According to this study tortoise leaves such the Philodendron’s leaves will grow slowly and steadily.  But sciences also prove that the leaves in the tropics live fewer years than leaves on trees in cold climates such as the spruce in Canada.

Below is the trunk of the Philodendron. 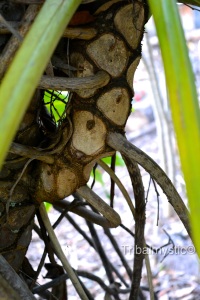 Even a Philodendron’s trunk has tortoise-like patterns. This part of the plant is where my art inspiration comes from. 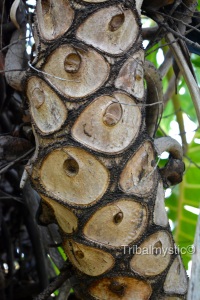 Papua New Guinea (PNG) is home to the world’s largest butterfly – the “Ornithoptera alexandrae” or Queen Alexandra birdwing. Its wingspan can grow to 25cm. Queen Alexandra only breeds and lives in the Managalas Plateau in Eastern PNG or Oro Province. The butterfly numbers are unknown, and its habitat is increasingly disappearing. There are also concerns that the number of the large butterflies are depleting.

The Queen Alexandra’s Birdwing is on the red list of threatened species of the International Union for Conservation of Nature (IUCN), and its international trade is banned. From the perspective of species conservationists, the butterfly satisfies all of the criteria to make it a critically endangered species.

Walter Rothschild discovered the species in 1907 and named it after Alexandra of Denmark. The first European to discover the butterfly was one of Rothschild’s employee, Albert Stewart Meek during their expedition to Papua New Guinea.

The threatened butterfly is vulnerable because of its unusual reproductive biology. The female lays its eggs exclusively on a poisonous vine called Aristolochia. Once the caterpillars have hatched, they ingest the plant’s toxic leaves, making them unpalatable for potential predators.

The Aristolochia winds its way up into the crowns of jungle trees, which can grow to heights of up to 40 meters (131 feet). The butterfly would be lost without the vine, so propagating the Aristolochia is one of the main goals of conservationists.

The Age Technology reported a pure white sparrow, the rarest incarnation of one of the world’s most common birds, has been spotted in suburban Melbourne.

A regular visitor to select gardens in Sanctuary Lakes in Melbourne’s west, locals have nicknamed the bird the “little white angel”.

Keen bird watcher Bob Winters, who worked as an environmental educator for the Gould League for 20 years, says the sparrow is a “one in a million neighbour” with only a handful of white sparrow sightings reported worldwide.

VISUAL ART JAPANESE ART AFTER FUKUSHIMA: RETURN OF GODZILLA ​RMIT Gallery Until May 30

Japanese Art After Fukushima is part of an excellent festival, Art + Climate = Change, which gathers local and international artists working with environmental ideas. It has spanned numerous venues across the state and is an important initiative of Guy Abrahams from the non-profit-making Climarte​.

The  earth will be re-shaped forever, once the Antarctic giant melting ice disappears. Does that not sound scary? It sounds very scary to me. And the water that is melting from the ice is enough to fill 1.3 million Olympic swimming pools.

Scientists say the antarctica’s once-massive Larsen B Ice Shelf is melting rapidly, and will likely be entirely gone by the end of this decade, according to a new report from NASA. A team led by Ala Khazendar of NASA’s Jet Propulsion Laboratory (JPL) found the shelf is developing large cracks while its tributary glaciers rapidly disintegrate.

Water is eating away at the Antarctic ice, melting it where it hits the oceans. As the ice sheets slowly thaw, water pours into the sea — 130 billion tons of ice (118 billion metric tons) per year for the past decade, according to NASA satellite calculations. That’s the weight of more than 356,000 Empire State Buildings, enough ice melt to fill more than 1.3 million Olympic swimming pools. And the melting is accelerating. See more