Although the area I am studying is quite large, I singled out a few houses on the outskirts that villagers painted with some of my favourite colours.

I hope to finish the painting this weekend.

Tell me of you like these work in progress shots. 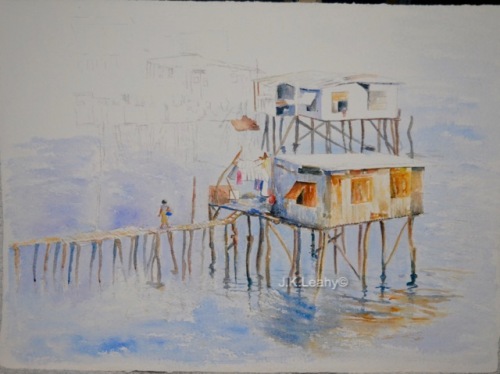 The South Pacific Games opens tonight in Port Moresby. After years of preparation by Papua New Guinea (PNG) and hundreds of regional athletes, the 15th South Pacific Games opening ceremony has begun in the nation’s capital. Australia and New Zealand participate for the first time ever. It is expected 24 South Pacific island countries will compete in the next two weeks. Citizens, visitors, and sportsmen and women at tonight’s opening will also witness the largest group of traditional dancers from across PNG. Up to 900 singsing groups will perform, according to organisers. Artistic director of tonight’s opening ceremony, Airleke Ingram, said it is a celebration of Papua New Guinea’s rich cultural history, while pointing to the country’s future direction. The ceremony’s theme is tied to the local region’s hiri trade, an important cultural influence. “It’s a really key part of our culture. There are a lot of songs, dances and tattoos,” said Mr Ingram, a music producer, traditional drummer and famed percussionist from Central Province. The ceremony pays homage to the trade relationship between the Motuan and Gulf Province people, and the role this played in shaping PNG. ABC News 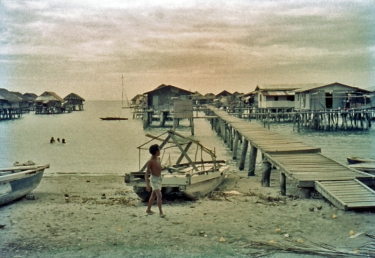 I have been to Tubuserea Village, Central Province, Papua New Guinea many times with my best friend Anne Kaluwin.  These are the scenes from Tubuserea almost five decades ago.

Anne and I grew up together like sisters, after meeting in grade eleven in national high school. I also invited her to my own village, Wagang, in Lae. I found these pictures of her village while reading some old articles and on a website called Nashos.  The pictures brought back many great memories especially of our time with her mother and grandmother who have now passed away.

These pictures were taken in 1967 when Anne and I would have been two and three years old. Anne is a year older than I. The photographs are part of a collection gathered by Australian soldiers and those who served in PNG between 1966 and 1973.

A short background about “The Hillside Find“.

My work as a journalist in PNG took me to police work as the Public Relations Deputy. I was based in the Police Headquarters, Papua New Guinea (PNG). My job was to handle media, write press releases, write speeches for the Police Minister and Commissioner and handle all public relations for the Police Force. There I rose through the ranks to become the deputy of the Community Relations Directorate. The late Commissioner David Tasion pushed for me to become the head of the Community Relations. He set up a rigorous training committee and programme that ensured all my training was packed into 12 months. During this time, the crime rate in PNG was very high and the Police PR was not good. My main role would be to improve this negative image.

Among all my training, I completed an inspector training course at Bomana Police College to earn an inspector’s ranking; I spent time in various sections of the Royal Papua New Guinea Constabulary and worked in many squatter settlements throughout Port Moresby in community relations programmes. I also had an attachment with the Royal Hong Kong Police in 1986, whilst Hong Kong was under British rule.

I became the Director at the age of 21 and took over a staff of 400 civilians and trained policemen (mostly male and much older than I).   People like Beth Harding, an Australian, a very strong woman and a dedicated teacher in PNG for over 30 years was working in the constabulary training. Beth also pushed me to become a strong managerial contender in one of PNG’s most fragile disciplinary forces and we did it! We set up many community programmes that linked police and the public and they joined hands to fight crime together.

My years in PNG Police were very interesting, exciting and sometimes dangerous and challenging. Because my role was multi-faceted and complex, my friends often joked at parties, rather than giving a long explanation, that I was a police dog trainer.

We established very good networks with the people on the streets and we had police living amongst squatter settlement communities. I had the best, teach me and I pay my respects to many that have passed away. I will always remember that time in my life from 1985 – 1989.

It was one of those days that I went out on detective work with head of the Investigating Unit, Supt Roy Tiden that left permanent imagery in my mind. I wrote this short story, “The Hillside Find” mid year, in my Creative Writing Class. The story is part of my memoir that I am writing. If you like this true story, look out for my memoir next year. With my teacher, Isabel D’ Avila Winter guiding me, I hope to complete most of the writing for the memoir this year.