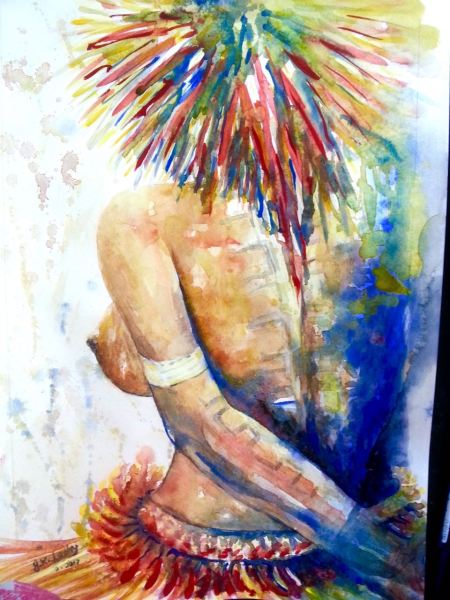 The  crowning of the Hiri  Hanenamo Queen is an annual event in Port Moresby, Papua New Guinea.  The contest is run to coincide with the PNG Independence celebrations. Above is my own interpretation of the queen. I enjoy this contest and the festival itself and am very proud of the Motuans for continuing to reinforce their heritage to their young women.

In 2016, Olive Tau was crowned as 2016 Miss Hiri Hanenamo Queen followed by her Runner- up Boni Bitu from Porebada village.

In third place and taking the Miss Hetura for 2016 was Maha Asi from Tubuserea village. See their pictures below courtesy of Loop PNG. 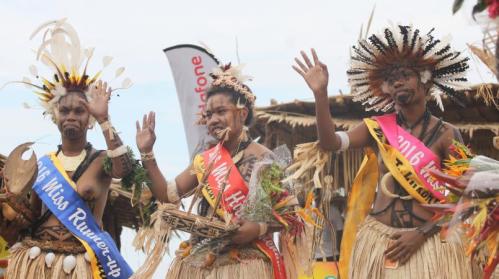 Hiri Trade – Adventure Kokoda
The Hiri Trade expedition was between the Motuan and the Erema (Gulf) people in the Gulf of Papua. This is a form of barter trade where the Motuans traded clay pots for sago with villagers along the Gulf coastline.
The Motuan (men) sailed westwards during the south-easterly winds known locally as the “Lahara winds”. After the trade, they returned when the winds changed eastwards. These winds are called the “Laurabada winds”.
According to oral history, the first sailing trip was led by an Edai Siabo of Boera village. Siabo was said to be inspired by a sea spirit after a fishing trip. With this inspiration, he and his henchman built a lagatoi (double hulled canoe) and made the first trip to the Gulf coastline.
This trip and subsequent trips were necessary because during these times there was usually drought along the Motuan coastline. Return trips brought a bountiful of sago to last throughout this drought. The actual trade would take only a few days however the return trip usually took place after 2 to 3 months.
During this long wait repairs are done on the canoes and relationships are strengthened among the traders. As a result of this long period of time away from home, it causes uncertainty back home – resulting in wives and partners of crew members re-marrying.
The return trips are usually arduous and dangerous as the wet winds brings with it storms. Lives are often lost also during these trips.
The last of such trading trips was in the late 1950’s where a Lagatoi sank just off the coast of Boera village. Several lives were lost in this mishap.
The colonial administration then banned trading trips as such. Today access to better transport system such as motor boats, airplanes and road links also contributed to the end of such trips.

What Hiri Hanenamo means.
Hanenamo is a young woman who display the right attitude, manners and behaviour and whose character is respectful of the such title. She observes the rules, norms and laws of her society bringing happiness to her family.
It is from this original concept that the modern-day Hiri Hanenamo (Queen) competition is derived from. In fact the wife of the first Hiri pioneer Edai Siabo was the first Hiri Hanenamo for her display of commitment and dedication to the rituals vital to ensuring a successful Hiri Trading voyage.
Hiri Hanenamo is not attributed to beauty alone; beauty is only one aspect of being a Hiri queen. Elegance and grace in carrying out duties and performances are also considered. Approval and appraisal by village elders honour such a person.
Today many of these components of village life are taken into consideration by the judges during the Hiri Hanenamo Quest staged during the festivities.
A young girl is declared Hiri Hanenamo if she can display the appropriate traditional qualities to the judges. In addition, authentic tattoo designs, bodily decoration and ornaments according to the background of the woman’s village is also taken into accounts.
Terminology:
Hiri – Trading route and voyage taken by the Motuan sailors.
Moale – Motuan word for celebration, happiness or joy
Hanenamo – A young Motuan woman who abides by all customary expectations within the community she resides in. 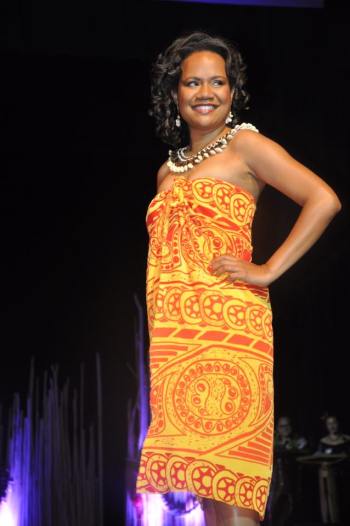 Papua New Guinea’s Abigail Havora has been crowned Miss Pacific Islands 2015 in a ceremony held in Rarotonga over the weekend. Her reign will end in 2016 when she crowns the next regional queen. This is the first time PNG won the regional contest. The stunning, intelligent and confident Abigail has strong opinions about status of women in Papua New Guinea and the Pacific Islands. She also wants to promote unity and diversity and bring Papua New Guineans together to build a strong nation.

In the beauty quest, Abigail believes true beauty comes from the heart. The Pacific Islands Pageant, she said “is a beauty of our cultures.” 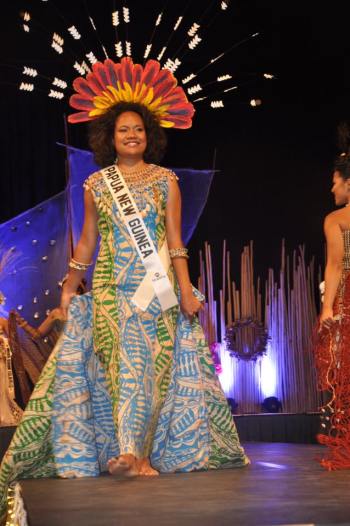 “It’s just about drawing from within, because that’s where our true beauty lies,” she said.

She told Radio Australia’s Pacific Beat earlier when she was crowned Miss PNG that Miss Pacific Islands is about “being a cultural ambassador” rather than focusing on physical beauty.

“Pacific Islanders are closely tied to our culture and that’s what the pageant hopes to bring out,” Ms Havora said.

“Culture is our way of life so each girl had their own definition or own way to show what culture meant to them, and that was what was showcased. My intent for the wider PNG is to bring a message that strengthens the bridge between culture and the changing times so young people, especially women, are more aware of what they are contributing to and the type of influence they are exerting”.

Abigail devotes her spare time to helping youths in PNG through The Voice Inc and is an ardent supporter of the PNG Cancer Foundation. She works for Oil Search Limited and through the Oil Search Adventure Club, they have developed a library Pouching System to build and strengthen libraries across PNG. 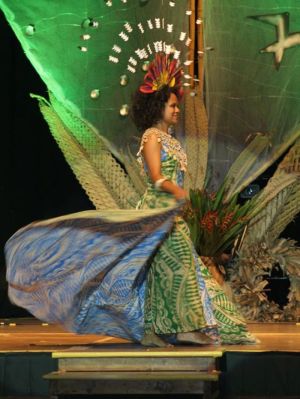 Ms Havora also picked up the Best Sarong and Best Talent Performance titles. She is from Gabagaba village in PNG’s Central Province.

Note from the writer – I would like to congratulate Abigail, her family and the Miss PNG Committee for making history in the region. Abigail, you have made  the women of Papua New Guinea very proud of you.