A slow-moving river of molten lava from an erupting volcano is edging closer towards dozens of homes and businesses in a seaside town on Hawaii’s Big Island.

The lava has already crept across a residential property and incinerated an outbuilding.

The lava flow from the Kilauea volcano has been moving towards the village of Pahoa for weeks and was clocked at speeds of up to 14 metres an hour as it bubbled over a road and overran a cemetery.

On Wednesday afternoon, the Hawaii Civil Defence agency said the lava advanced to within 250 metres of Pahoa Village Road, the main street through the town of about 800 people, built on the site of an old sugar plantation. 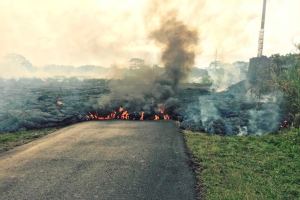 Civil Defence administrator Darryl Oliveira said Pahoa’s commercial district lies mostly to the south of the area in greatest danger, and most homes and businesses are believed to be out of harm’s way, based on the lava’s current trajectory.

“Right now where the flow is moving we’re very fortunate because the number and concentration of structures is very low,” Mr Oliveira said.

“But the caution to that is even though the flow front is very narrow at this time, if the eruption continues and the flow continues to be supported by the tube system a widening of the activity or flow is likely to occur.”

However residents of about 50 dwellings in what civil defence officials called a “corridor of risk” were urged to prepare to leave, and many were slowly emptying their homes of furniture and belongings.

Mr Oliveira told a news conference that no mandatory evacuations had been ordered but 83 national guard troops were undergoing training and would be deployed to the community on Thursday.
VIDEO: Lava flow from Hawaii’s Kilauea volcano (YouTube: Ena Media Hawaii/Blue Hawaiian Helicopters)
On Tuesday the molten rock topping temperatures of 900 degrees Celsius engulfed a utility shed but spared the adjacent house on the property, already evacuated and cleared of furniture and other belongings.

“So far we have been very fortunate that the flow has not taken any other structures,” Mr Oliveira said.

Officials said they would close an endangered elementary school on Wednesday and shutter four more schools on Thursday.

The US Geological Survey’s Hawaiian Volcano Observatory said the leading edge of the lava stream had narrowed to about 45 metres wide.

“[They’re] just moving all their valuables out and then moving,” he said.

“There’s not much else you can do, it’s a force of nature.”