He had contracted a severe form of influenza which was subsequently compounded by pneumonia and other complications.

In November 1947, he joined the Department of District Services and Native Affairs in the Administration of what was then the Territory of Papua and New Guinea.

After attending an orientation course at ASOPA he travelled to PNG in August 1948 as a cadet patrol officer and served on many outposts as he progressed through the field officer ranks.

Between 1969 and 1974, he was the last Australian district commissioner presiding over what is now Eastern Highlands Province.

Sinclair conducted extensive exploratory and pacification patrols in Morobe and the Southern Highlands, opening the Koroba station in 1955, the Lake Kopiago base camp in 1956 and exploring then uncontrolled areas as far as the Strickland River.

In 1959 he married Janece (Jan) Marie McGrath and they had three children. In an important way, Sinclair owed his later career as a successful author to Jan.

Also in 1959, he was appointed as officer in charge of the Wau sub-district, later serving in similar roles in Finschhafen and Lae before moving to the Eastern Highlands in 1968 as district commissioner.

Sinclair retired in 1975 around the time Papua New Guinea’s independence and embarked on his second career as a prolific recorder of PNG history, becoming a full-time author.

His first book, ‘Behind the Ranges’¸ had been published in 1966 and told of his exploratory work in Morobe and the Southern Highlands. His publishing oeuvre ultimately came to comprise nearly 40 books (see bibliography below).

Sinclair was awarded an Order of the British Empire (OBE) in 1992, an honorary doctorate from the Australian National University in 1999 and a Companion in the Order of the Star of Melanesia in 2008.

“Jim Sinclair was our leader….” – still from the 1958 documentary film, ‘New Guinea Patrol’.

“We were so fortunate to have Jim Sinclair among us,” said Peter Salmon, publisher of the Ex Kiap website.

“Jim was one of nature’s gentlemen,” Peter Brindley, who served under him in the Eastern Highlands in 1970, told the Ex Kiap website. “The world is a lesser place now.”

“One of the old school,” said Ross Johnson. “His passing represents the end of an era. “Rest in peace, my friend, bihain bi mi lukim yu.”

Long time PNG resident Rob Parer CMG OBE observed that “Jim was certainly PNG’s man of letters. He wrote such complete accounts of so many diverse subjects. Thousands of pages.”

And Parer disclosed how close Papua New Guinea and Australia had come to being denied Sinclair’s chronicles. “A short time after she married him, Jan said she saw him tearing up a huge pile of sheets of paper held together by long bolts,” Parer said.

“When she asked him what he was doing, Jim said ‘just some stuff I’ve written and everyone in New Guinea writes stuff.’

“Jan stopped him, and the rest is history,” Parer added.

Behind the Ranges: Patrolling in New Guinea, Melbourne University Press, 1966.

Up From South, by Jack O’Neill with notes and background by James Sinclair. Oxford  University Press, 1979 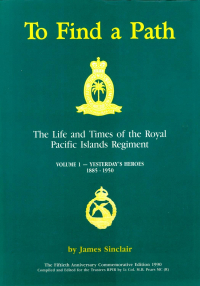 To Find a Path: The Life and Times of the Royal Pacific Islands Regiment. Vol One: 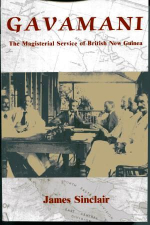 The Middle Kingdom – a major history of the Highlands Districts of PNG from the beginnings to Independence, Crawford House Publishing, Adelaide, 2014