It rained yesterday.  Guess what was on the chicken house? Not a spider this time. The rain catcher, the first Green Tree Frog (I have seen) for 2016. Sitting strategically where all the rainwater ran to it, it had its eyes shut until I approached with the camera.

This frog, the Litoria caerulea or the Green Tree Frog lives in Queensland. It is also found in northern and eastern Australia. It is generally a large frog, and grows to 110mm. The frog is green to light brown or even blue, short snout and rounded face. It has a smooth, thick skin on head and shoulders. Some have white spots or irregular stripe from mouth to forearm. Its abdomen is white and  the back of its thighs is sometimes maroon or yellow. More information can be found on Save Our Waterways.

Although they are called the tree frog, they love to live in building drain pipes and water tanks. In summertime of course, they love wide open spaces with waterways…I guess that’s why this frog found this spot and stayed. I wish I could have told the frog this was not a waterway, but as soon as the rain stopped, it disappeared. 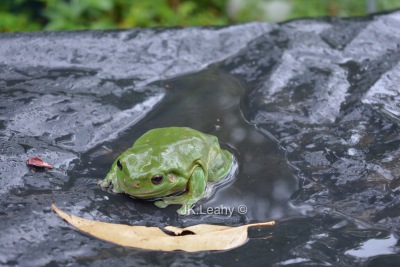 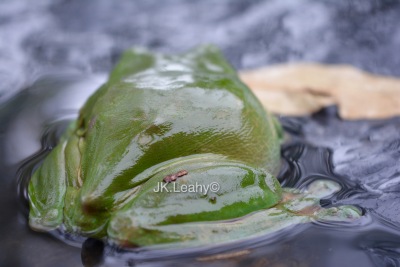