I have found these stories very fascinating. One story is about the Japanese monks and the other story is about ancient Chinese statues and an interesting discovery. 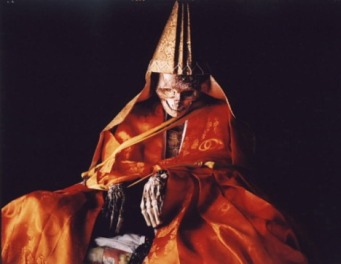 Scattered throughout Northern Japan around the Yamagata Prefecture are two dozen mummified Japanese monks known as Sokushinbutsu, who caused their own deaths in a way that resulted in their mummification. The practice was first pioneered by a priest named Kuukai over 1000 years ago at the temple complex of Mount Koya, in Wakayama prefecture. Kuukai was founder of the Shingon sect of Buddhism, which is the sect that came up with the idea of enlightenment through physical punishment. A successful mummification took upwards of ten years. It is believed that many hundreds of monks tried, but only between 16 and 24 such mummifications have been discovered to date.

The elaborate process started with 1,000 days of eating a special diet consisting only of nuts and seeds, while taking part in a regimen of rigorous physical activity that stripped them of their body fat. They then ate only bark and roots for another thousand days and began drinking a poisonous tea made from the sap of the Urushi tree, normally used to lacquer bowls. Read more

Here is another story relating to the same. 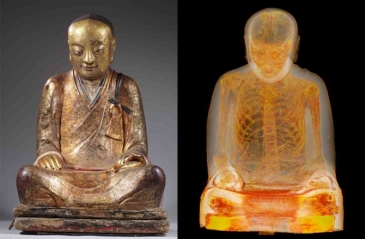 Researchers at the Drents Museum in the Netherlands made a shocking discovery when they imaged an ancient Chinese statue and found a nearly 1,000-year-old mummy inside.

Sitting in the lotus position, the mummy fits within the statue perfectly.

“On the outside, it looks like a large statue of Buddha,” the museum said in a release. “Scan research has shown that on the inside, it is the mummy of a Buddhist monk who lived around the year 1100.”